We’re all aware of the 7 deadly sins, also known as Capital Vices, Cardinal Sins, Ways of Life, etc, etc. There were originally 8 back in olden Grecian times but today they’re most often passed as the following: Lust, Gluttony, Greed, Sloth, Wrath, Envy and Pride. Sure there are Virtues as well (Chastity, Temperance, Charity, Diligence, Patience, Kindness, Humility) but they’re neither enticing or relevant to this posting so lets move on, shall we?  What if we could go back to the overzealous times of 8 deadly sins, maybe 9, dare I say…..10? 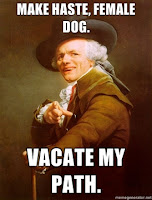 Considering I’m not alone in committing at least 2 of these in my life time, I think I’d like to explore a few other options should there ever be a 21st century version of the cardinal sin handbook.
Starting with….#1) Haste/Eagerness – means to excessively speed or forcefully rush upon life for something built entirely by ego for the mere purpose of stroking itself. Okay maybe I added the last part but really, who are we kidding. We rush and rush to what exactly? Be first? Be the best? Get an exit row seat on Southwest for the extra legroom? Really, the only purpose is to hurry up in life only to end up waiting for the next starting gun to go off. Its exhausting…..except with the Southwest exit row possibility. Even on a 30 minute flight, one feels like a sardine anywhere else on that plane.

Which brings me to #2) A Sense of Humor. Seriously who ISN’T guilty of needing a little of that when life really kicks you the pants. Between the knees. By Beckham in his prime. With a steel toed….well, you get the picture. Sometimes in life, we need to find the humor in the most horrendous of circumstances. Even when there’s nothing to laugh at or laughing is the last thing on earth one should do. Hey, Aflac isnt looking for a new spokesperson for nothing. It’s not always appropriate but if it wasn’t for a sense of humor I doubt any of us would have made it this far in our lives. And if laughing when I should be crying every once and awhile is a mortal sin then I’m dead already. A few times actually. Thank god for that whole ‘9-lives-cat-theory’… 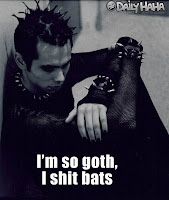 And now for lucky #3) Love – Gasp! Yea I said it. What of it? I’ll say it again….this time with feeling. L to tha O to the V with an E. Cause let’s face it, it can surely feel like a sin at times. Just ask any emo kid. It kinda puts a damper in that whole ‘woe is me cause my life sucks since society despises my guy-liner and my wardrobe collected from the closet of the chick in The Ring’ persona. How do you think Hot Pink made in into the mix as a new Emo Color? Because someone got all lustified and decided a hot pink bubbly heart would rock next to all black and WHAM! A new way to express your tortured self was born. Why would ‘Lust’ even exist for this teensy yet mighty word. You may lust for a person because you love them for who they are or how they make you feel. In most cases, the only love you feel is for how their nice ‘assets’ make your nether-regions feel. But either way, I’m pretty sure no one was ever consumed with love & lust over a modest “2 outta 10”. Not to mention the fact that, Envy, Greed, and Pride are not just friends of Lust but also claim “Love” as a part of their catalyst in the mortal sin club. I’ve watched enough TLC, Lifetime and Oprah to know to know that Love will make you do some (Je parie du francais) real fucked up shit. And almost all of it will boil down to thinking it’s all sane and valid since Love caused us do things we never in a million years would think we’d do. I’m envious of women who can get knocked up by simply thinking the word penis. Why? Because I love kids and I cant have them. C’est La Vie and such is another sin being committed. We are all eager to get ahead in this world so we can stroke our greedy little egos with a little luxury relaxation, perhaps a plush chinchilla interior, or even just a kick ass puppy. And Pride, well….hello? Pride is because we love our own ego’s perception of itself much too much to humbly accept our own faults and admit we’re not the best at something.(At times privately, rarely publicly.)

So in my opinion, if you can add new testaments and redefine passages in the bible like so many faiths do, then I’m sure there are a few revisions in the Deadly Sins book, too. And I’m going to stick by that theory….even though I’m only now realizing that I’ve also added also three more ways in which to lose my mortality and insure my inevitable residency in Hell. But remain chipper folks since I’m proof positive that committing them will  truly not kill me on the spot. Which is a quote that would be beyond ironic should my life tragically end in ways that could only be portrayed through an original Lifetime movie. Or maybe a Law & Order SVU episode…(preferably with lots of B.D. Wong). But definitely not a CSI-Anywhere episode. That show is a sin in itself…and not the fun kind.