(WRITERS NOTE: Yes, this is a LOOOOOOOONG one but there was no way to condense it any more and believe me, it’s worth it.) 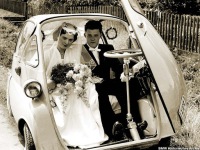 In this budding time of engagements, weddings and all the showers and gifts that go with them, I cant help but wonder how this whole marriage thing became so completely out of hand. Isn’t marriage about two people coming together in matrimony, under whatever they believe in, with the soul purpose being nothing more than a ritual of one life joining another, forever. Oh…and to procreate in an effort to save the human race, but that’s just a bonus. It was simple, it was spiritual, and most of all, it was created by MEN. (And considering I just probably lost 90% of my male readers who actually chose to read about the dreaded M word….trust me when I say, I’m on your side and if you can stomach this long enough to make it to the end, you’ll see that. Now good luck.)

That well known fact of men’s reaction to marriage is what makes the concept of marriage today so inherently funny to me. I mean, lets face it, I doubt there’s a man alive – gay or straight – that doesn’t get a knot in their throat when hearing the word “marriage”…..and that’s just when it’s via a commercial for Kay Jewelers at 4am. There are exceptions of course, and I know several women who feel the same, but for the most part, Men fear the concept marriage. Men avoid the concept marriage and often because Men loath the concept of marriage. This I find most fascinating. Why? I’m SOOO glad you asked…..

Marriage, in it’s original form, was created for a few reasons, all varying in sect and as diverse as the tribes in which they were derived. However ALL of them we’re created by a Man as, at the time, most women shared no benefit in marriage at all. I mean ‘bundling’?!? Camon. Whether it was for a Man’s need for his seed to be sown, the need to sow those seeds on a consistent basis but not wanting to shell out the drachma for it each time, or (as was often the case) to satisfy their own need for security by owning a women the same way he owns his land and flock. You see, the theme of marriage seemed to remedy all of them.

Most men married in their 20s-30s, offering a dowry to the family of a woman that by today’s standards would be considered pre-pubescent rather than a ‘woman’.  Under this hierarchy cloaked in a set of two equal gold bands and sheet with a hole in it, our said ‘woman’ was less than interested in marriage, often running away or committing suicide to escape an arranged one. A woman could not sleep with many men, just with the one who owns her. She could not fall in love or make herself available to any man, unless it happened to be the one her father wished to sell her off to. And all for the bargain basement price of 3 cows, 2 chickens and an ox.(No coupons required)
Yes, I think it’s safe to say that in it’s original form, man’s idea of marriage was neither equal or pleasant, let alone something a little girl would dream of while washing the pig shit and rancid cow milk out of her petticoat. Which is what makes it all so ironic and brings me to my point. Cut to the 21st century. Where marriage is something that’s expected and encouraged from female to female, bringing the average “all American” wedding cost to $35,000 and climbing higher each year.
How did this happen? How did we go from wanting to slip off a cliff rather than marry Morty Von Douchestrap in exchange for more beef than your family would see in a 2 lifetimes to now – having the whole thing planned out from the day you turned 5 and began the hunt for Mr. Right by the ripe old age of 10? Personally, I think it was evolution. Yes, that’s right. Evolution. Women have EVOLVED into the marriage-obsessed ring-hunters you see today and thanks to networks like Bravo & E!, I don’t see it slowing down anytime soon. 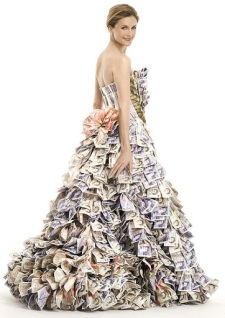 After centuries of being brainwashed into ‘wedded bliss’ by Men (not to mention our mothers, but that’s a whole other can of worms), Women began realize just how much marriage could benefit them. So in proper bridal fashion, we hopped on board with a quickness and put our own frilly spin on it in the process. A spin, mind you, that has now spawned an estimated 71 Billion dollar a year industry. Yes, you read that right…..SEVENTY. ONE. BILLION. DOLLARS.….and that derailed train shows no signs of stopping either.
Men, if you’ve even made it this far into this posting….2 things. 1.) Pat yourself on the back for having the stamina to read this deeply into it……and 2.) Know that YOU are not entirely to blame for all the chaos. Disney, and now the ever popular ‘Rom-Coms’ play a big part as well. (Rom Com – the hipster vernacular for Romantic Comedies) In fact, I am convinced they are both to blame for the increase in ‘perpetually-single-but-looking’ 40+ year old females. Often expecting things entirely unrealistic for anyone dead or alive because if it can work out for Jen Aniston and Sandra Bullock and Seth Rogan then damn it, it’ll happen just like that for them too. Hell, with all of the product placement in the entire film, they practically mold us into being the oh so attractive Bridezillas we are today. From the time we can start using a potty & eating solids, we’re ready to be a princess bride because Disney & Producers know, that like crack….once you get a taste, there ain’t no goin’ back. (or so I’m told…never really touched the stuff….either one)

It’s an easy sell too with their constant tales of Prince Charming rescuing his Princess and bringing her to a better life of wedded bliss where there’s not a care in the world except how you both wish there were more hours in the day to completely adore each other, all while riding off into the sunset, holding a puppy on a white horse named Toonsis. Complete with dancing cherubs, singing daffodils and even a jazz fluting frog or two in the background. That Walt…he clearly knew the way into a 4 year old girl’s heart. (and a few little fashionable boys too) Combine that logic with pre-teen, teen and even adult Rom-Coms that continue to drill the damagingly unrealistic yet unbelievably appealing visions of marital bliss sugar plums that dance in our heads forever. No wonder we’re all so disappointed with the reality of it all, causing the already high divorce rate in this country increase. But I digress….
I wonder what the forefathers of marriage would say if they knew how drastically different their creation has now become. I guess shelling out a few dates, figs & pistachios’ for some oat sowing without commitment seems pretty good right about now, don’t it?  Hey, millions of Charlie Sheens around the world cant be wrong.